ITALIAN
The Camp was set up by the Italian War Ministry to house members of the Allied Forces who had been  taken prisoner in North Africa. After the Italian Armistice of 8 September 1943 the camp passed into German hands and was used as a transit camp -  Dulag 132 - from which prisoners were sent to Stalags in Germany.

The documentation relating to the setting up of and modification of PG 82 can be found IN ITALIAN on website www.campifascisti.it. The important points contained in these documents have been translated and are as follows:

Setting up of the camp
The first document relating to the camp is dated 1 August 1942 and was sent to from the Prisoner of War Office to the War Cabinet. The camp had not yet been completed and a query had arisen as to its proximity to the railway line (Rome-Florence):The monthly documents released in the Autumn of 1942 gave the camp's capacity as 6,000 and described it as 'attendato' – the accommodation was in tents. A telegram dated 16 January 1943 and addressed to numerous bodies concerned with prisoners of war urgently recommended that

- Campo 82 should be enlarged by means of a third sector consisting of barracks. This would bring the capacity up to 3,000 places per sector.

Subsequent enlargement
As the following chart shows, compiled from the monthly data reproduced on website www.campifascisti.it, actual numbers were below this capacity: 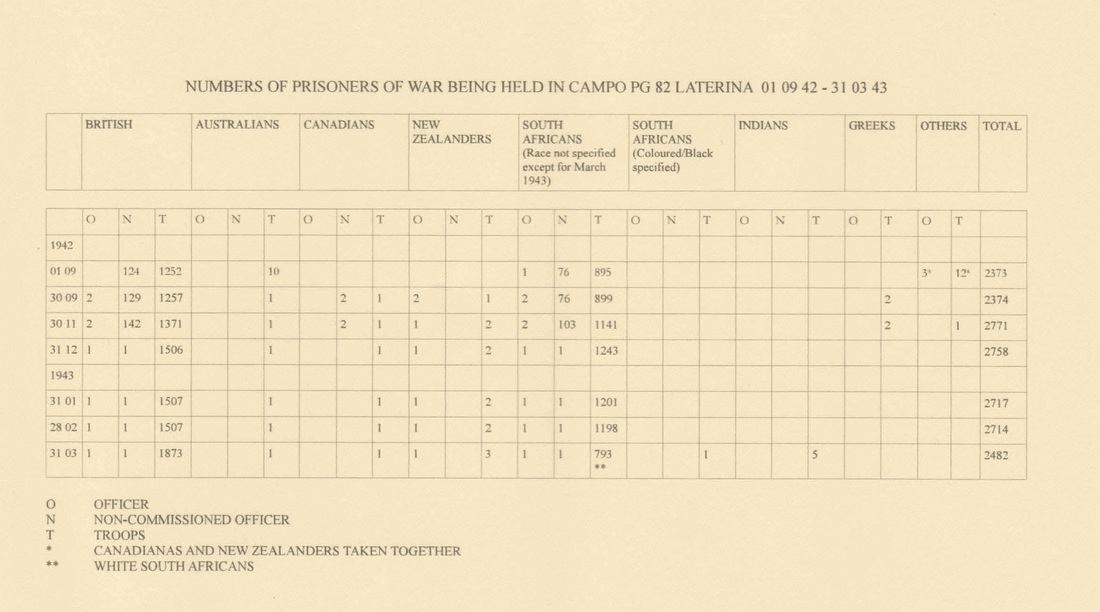 Movement to satellite work camps
In November 1942 the first group of prisoners left PG 82 destined to work in a ceramics factory at Lappato near Lucca. Italian documents on website www.campifascisti.it indicate the number of men requested by the companies concerned, but the actual number working for these enterprises was much lower.  It is believed that most men were employed in agriculture but where this is presumed and not certain the word appears in italics in the chart below: 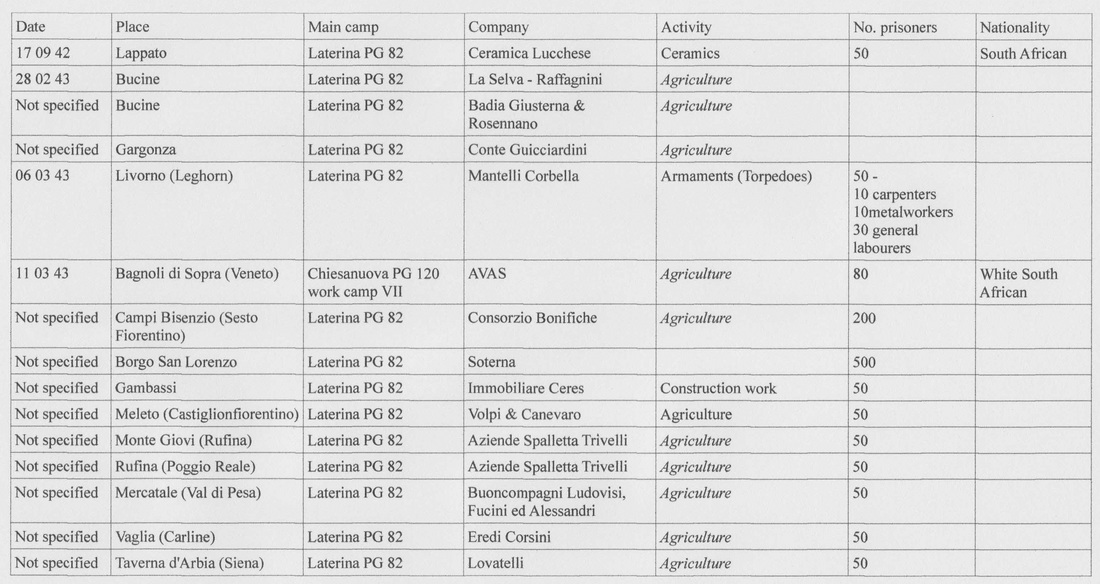 (There is written evidence that other work camps existed,  in the Val d'Orcia,   at the Castello di Brolio, and at Pistoia, but they do not appear in Italian documentation.  See the Testimonies page.)
The following maps show the location of the work camps: 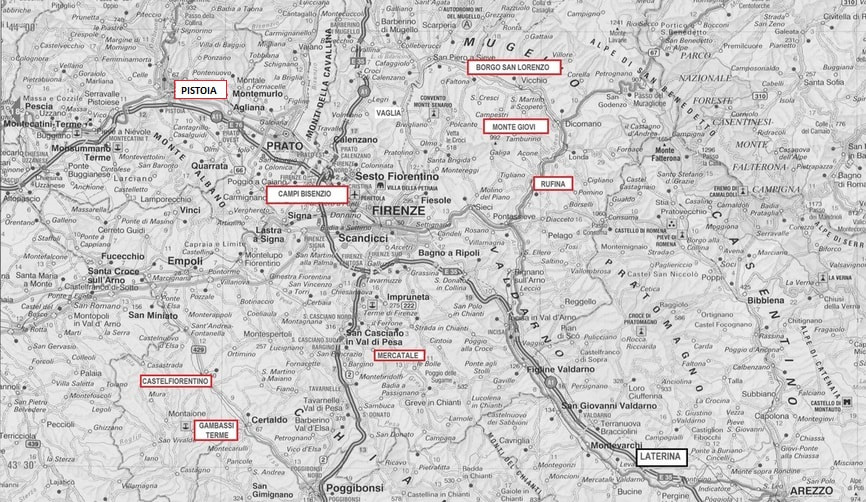 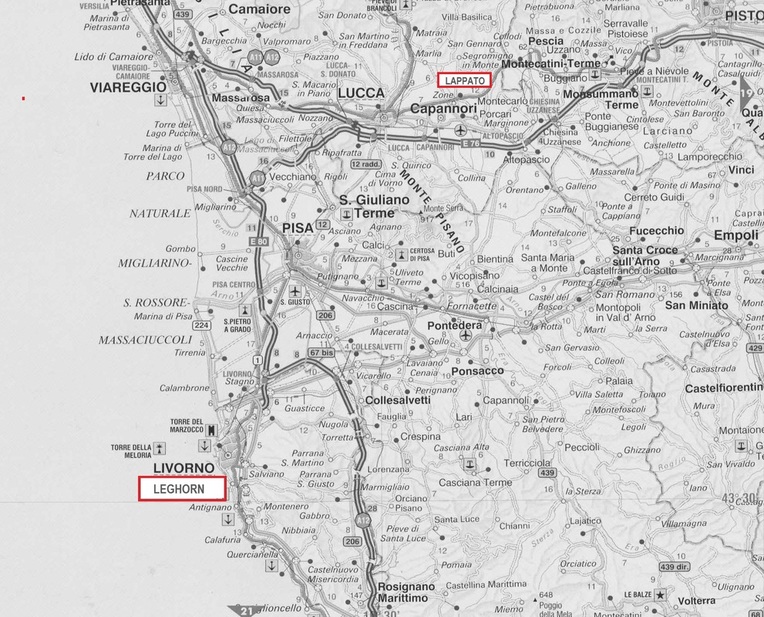 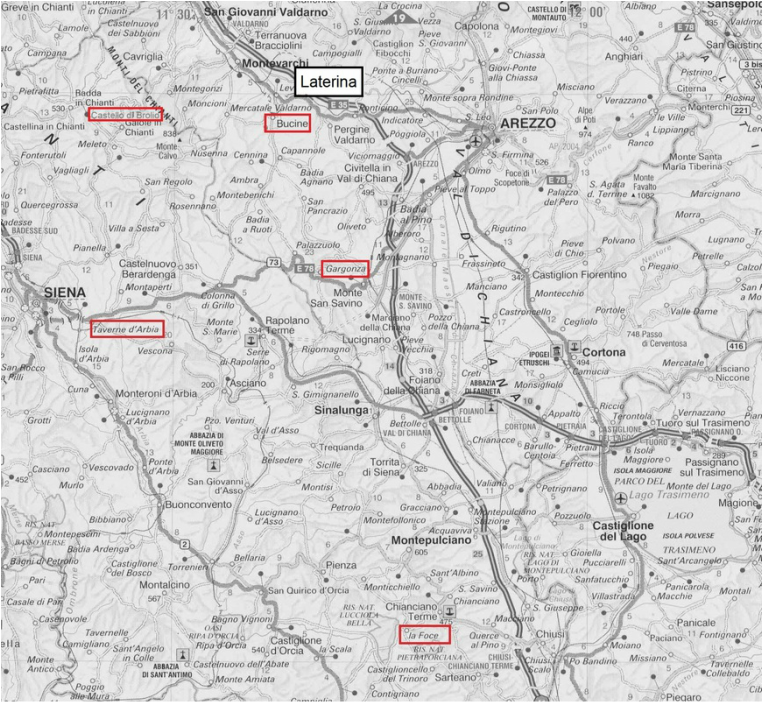 Lappato Work Camp
​
17 November 1942
50 white South Africans are to be sent to the company Ceramica Lucchese, at Lappato (near Pisa) immediately. It should be borne in mind that:It should be pointed out to those prisoners who are to form this workforce at Lappato article 27 of the Geneva Convention legitimises the use of other ranks as labour, and any slow timing, refusal to work, or absenteeism will be considered as a refusal to obey orders and may lead to punitive measures being taken.

17 March 1943
War Office
Prisoner of War Section
For the attention of the Regional Office, Firenze (Florence)   r.e Work Camp Lappato
From a recently carried out inspection, instigated by this office, of the work camp at Lappato in the premises of the Società Anonima Lucchese Ceramica ed Affini it was clear that the prisoners of war were working in close proximity with the civilian employees of both sexes.
Given that current regulations prohibit – both during and outside working hours – any such contact between prisoners and civilians, it is required that the company concerned shall strictly observe the rules, informing it that should it be impossible to eliminate these contacts entirely they should renounce the use of prisoners of war as a labour force.

(For an account of life in this work camp see the account of L/Cpl W.M. Stevens on the Camp Conditions  page)

A document reproduced on website www.campifascist.it relates to a request for labour from the Veneto region of Italy, near to the town of Padua (Padova):

Prisoner of War Office
6 February 1943
For the attention of Military District Florence, Transport System e Military District Treviso, and Campo Chiesanuova Padova
​
130 White South African farmworkers currently held in PG82 to be sent as a matter of urgency to detachment Saonara, railway station Padova, and Villa Vollemberg, railway station Abano Terme, both being sub camps of the Camp at Chiesanuova. The groups must be accompanied by interpreters.

All four escaped at the time of the Armistice.  Their stories can be read on the Testimonies page 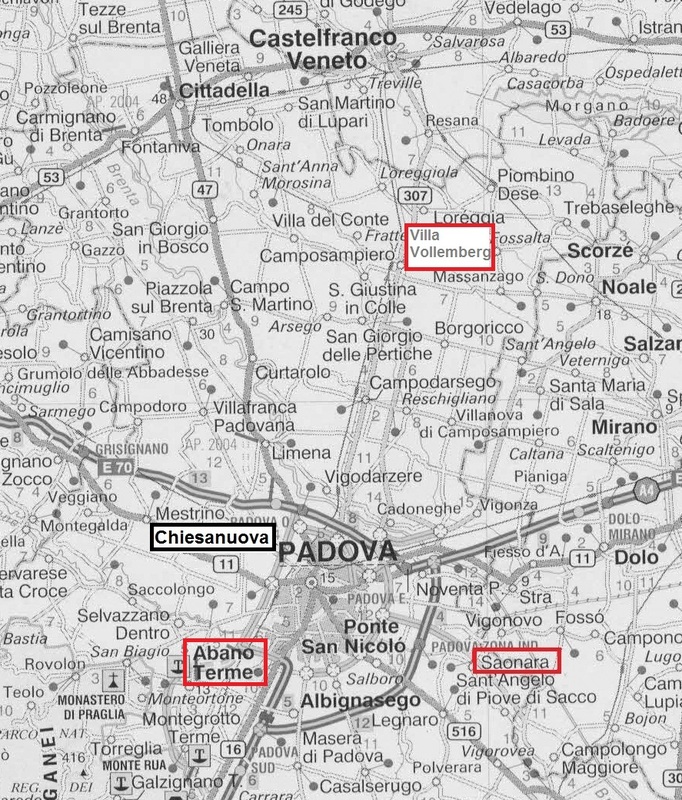 Prisoners sent to Germany before the Italian Armistice (8 September 1943)

There had been a hint in December 1942 that, in view of the impending collapse of Italy, British prisoners held there would be transferred to Germany. But, in response to an inquiry by the Italian ambassador to the Vatican, Mussolini had replied that there was no truth in the report. Nevertheless, between 19-22 July, just before the fall of Mussolini on the 25th,  almost 3000 prisoners from three camps – PG 82 Laterina, PG 53 and PG 73  (visit www.campifascisti.it and open the Documenti section for each camp) were transported to Germany and accommodated in Stalag IVB at Mühlberg before being dispersed to other Stalags, mainly to Stalag 344 Lamsdorf in Poland.. Men in other camps were warned at about the same time that they were soon to be moved to an unknown destination.

After the fall of Mussolini on 25 July 1943, in reply to a protest by Great Britain, the Government, run by his successor, Marshal Pietro Badoglio, gave an assurance that there would be no more such transfers, at the same time explaining that those already transferred had been originally captured by the German forces.

Below is a chart showing this information.  In addition it gives camps other than PG 82 Laterina in which the men had been previously held (WO 392/21 www.nationalarchives.gov.uk) and also their final destination according to WO 391/1 www.nationalarchives.gov.uk, which may not be 100per cent accurate.  Further information about this transfer can be found in FO 916/692.

The National Archives located a Kew, London, contain some important material relating to Camp PG 82.  Here is a list of the relevant files:

Janet Kinrade Dethick October 2016
Recomendations fo the award of the Military Medal
Two soldiers belonging to the Royal Army Service Corps were recommended for the Military Medal after a series of post- Armistice Escapes, the final one in each case being from LATERINA

T/230944 Corporal HART, Forrester,  R.A.S.C. Platoon, att. 68 Med. Regt. R.A.
Cpl. HART was captured at TOBRUK on 22 Jun. 42. On 12 February 43 he escaped alone from GRAVINA (Camp 65 Italy) by cutting the wIre at night, but was recaptured 5 days later on the beach near BARI.  At the time of the Italian Armistice he was at MACERATA (Camp 53) and on 18 Sept. was entrained for transfer to Germany. Hart discovered that the truck was not securely fastened and, although the senior N.C.O. forbade him to escape, jumped onto the line. Recaptured within forty-eight hours HART was again entrained for GERMANY. With a paratrooper he escaped through the window of the truck and travelled to MONTALTO ( di Cessapalombo in the Marche Region).  During February 44 Hart was again caught by the Germans. He was taken to a temporary prison at ASCOLI, but managed to leave through a a third storey window whilst only one guard was on duty. He returned to MONTALTO and stayed with a partisan band until the end of March 1944. Captured by Fascists at VALLESANTO on 5 April 1944, HART remained in prison until the middle of June 1944. When the Germans evacuated LATERINA camp HART hid in a tree for 11 hours; descending after their departure, he went to PONTENANO to serve with a rebel unit. On 27 July HART met British forces at SAN GIUSTINO.

Recommended for the award of the Military Medal

Pte. ANKERS was captured at Gazala on 1 June 42 and was released form AQUILA (Camp 102) on 19 Sept. 43.  After spending two months at COLLE CASTAGNA he and another prisoner tried to cross the lines; they had reached the SANGRO river when they were caught by two Germans. During tranfer to Germany the train stopped at a small station near Lake TRASIMENO and some of the prisoners were allowed to obtain a drink from the fountain on the platform. Ankers detached himself from the crowd, broke into a storeroom and, carrying a bag of cement, left the station unchallenged in spite of the fact that he was wearing battle-dress. He returned to COLLE CASTAGNA, leaving at the end of April for another attempt to cross the lines. With three companions (one of them was a deserter from the German army) crossed a minefield and, reaching the coast, embarked on a rowing boat. Their departure had been noticed and before they were out of range a Verey light revealed their exact position and they were compelled to return. The German deserter succeeded in escaping, but the three Allied servicemen were sent to LATERINA (Camp 82). At the beginning of June 44, when being marched to MONTEVARCHI, Ankers slipped away from the column. On 14 June he met French forces near MONTE S. MARIA.

Recommended for the award of the Military Medal.