​
The five men who died between October 1942 and May 1943 are all recorded in the Protecting Power's camp reports, the last of which was on 26 May 1943. Four deaths took place afterwards but before the Armistice and there is no information about the circumstances of these men's deaths. Two were in June – one shortly after the last inspection - and two, both South African, in August. It is interesting to note that these two South Africans  had been held in Sardinia and would have travelled from there to Laterina in the company of Cpl. de Bruyn de Jager, (see Testimonies). A serviceman recorded on the concentration form with the surname Motmans, buried in Section II, Row C, Plot 11, was transferred elsewhere as it was believed that he was not a member of the British or Commonwealth forces.

The circumstances of Trooper Schalit's death are not known to date, but there is some information about another three men:

12230 Private Alfred George Mundell
An escaper who died in unknown circumstances and was initially buried in the Civil Cemetery in Arezzo. The Parish register gave his date of death (26-9-43) and his place of residence, Cape Province, and presumably his name, as the Graves Unit who recovered him wrote:

On exhumation the body was found wrapped in a sheet and buried in a coffin, no further means of identification could be found, as there were only bones left in water-logged coffin.

243247 Lance Corporal Joseph Gluckmann
Lance Corporal Gluckmann's date of death is given as 10/06/1944 on the Commonwealth War Graves Commission website. Their Graves Unit concentration form has the following details regarding him:

A prisoner at PG 82 before the Armistice, L/Cpl. Gluckmann  was known to some local people who had seen to it that he was given a decent temporary burial.  In Italian  literature regarding resistance and reprisals there is a reference to a South African  named George Gleem, who, unlike Cpl. Gluckmann, does not figure in WO 392/21.  I quote from Le Stragi del 1944 nella Toscana Orientale by Enzo Droandi, pub. Calosci Cortona 2006, translated by me:

...George Gleem, who spent  the autumn and first part of the winter near to the hamlet of Sorbaccio, looked after by the Zati and 'Becone' families...George Gleem was killed during  a partisan action ...towards the middle of June.  He was taken by mule to Pontenano, where he was buried, according to custom and practice, outside the cemetery,  because he was a Protestant.

It may be that L/Cpl Gluckmann had changed his name to George, and that Gleem was the rendering of Gluckmann by the author of the extract  just quoted.  He may also have pretended to be Protestant to avoid any problems should he have been recaptured - hence the marble cross - but on his person was found the Star of David, as recorded by the Graves Unit.

241407 Private Vincent Erskine Freeman
The circumstances of Pte. Freeman's death are recounted by Sgt. George Cross in the Camp Conditions  section, and are also referred to by A.B. Bell in the Testimonies section. His military records show the following entry: 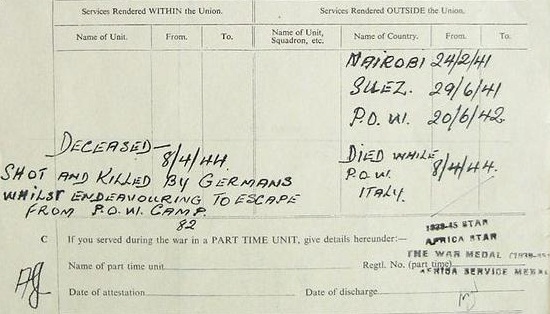 Part of Pte. Freeman's military record
Although it is believed that eight men were killed on the Forced March only five were taken to the CWGC Cemetery in Arezzo, and of these three were unknown. One of them, buried in Plot II C16, believed to be from a country which was not the UK or one of those belonging to the Commonwealth,  was transferred to another cemetery, the details of which are not in the CWGC's records.  He may have been the serviceman described by witnesses as being an American, or the other described as belonging to the French Foreign Legion. (see War Crimes and Testimonies).
Janet Kinrade Dethick October 2016 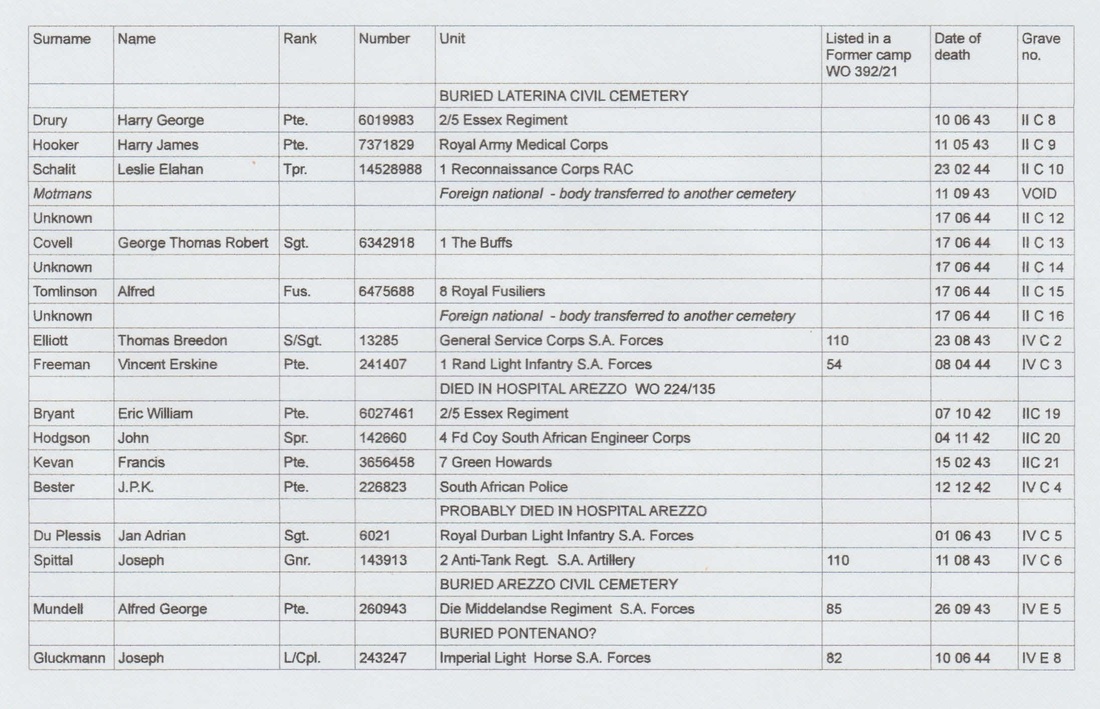